A champion racer and a detective hailing from New York in 2051, Rick's life came to a tragic end, not before he was awake from cryo-sleep for 150 years. Now a member of the Galaxy Mobile Platoon, Rick now competes in F-Zero races, but vows to bring the one who nearly killed him to justice, Zoda. His vehicle is the Dragon Bird. He's the main protagonist next to Captain Falcon and Jody Summer. His greatest rival and his best friend is Jack Levin.

Rick always has unfathomable courage and determination when he goes against his greatest challenges. He tends to get hotheaded as he deals with Zoda as a way to avenge Haruka and repair his shattered life. He can sometimes be a bit foolish in several races, to the point where Jody called him a "glory hog".

Despite Rick's impulsive nature, he is also well-known to be dedicated, strong-willed and noble. He would even sacrifice himself if it comes to save someone else from impending death; a perfect example was when he shielded Jody from a volley of bullets from a Dark Million cruiser at Planet Alcatran.

Rick has competed in many races. In the second episode of the anime F-Zero: GP Legend, he crosses paths with the mysterious Captain Falcon and has worked with and raced against him on various occasions.

Rick also had a girlfriend, named Haruka Misaki whom he loved very dearly before he was put into cold sleep. Before the tragic accident, he wanted to propose to himself to her. Prior to breaking the question, he was called into an assignment in hunting down Zoda, a deadly convict who escaped from prison. He was able to shoot off the driver-side door with a rifle as he escaped in a stolen vehicle, resulting in Rick's accident.

Rick was then put into suspended animation since his injuries were too severe; the current medical technology wasn't able to heal him properly, and as he woke up he met Jody and Dr. Stewart. He then rushed out to propose to his lost love, but was always unable to find her.

By Lap 8, Rick kept mourning over his loss and how Zoda nearly destroyed him then. The woman he once rescued turned out to be one of Dark Million's most lethal assassins known as Luna Ryder/Lady Killer. Despite his vengeance for Zoda, he eventually discovered that she is actually Haruka brainwashed by him as soon as she woke up from cryosleep.

Later on in the anime, Dr. Stewart has revealed there was a reason why Rick was revived; he is destined to be the Savior of the universe from Black Shadow. He must obtain all the Reactor Mights before Dark Million does, and his Dragon Bird has housed one of them unbeknownst to Dr. Clash. It was said that he used to be mentored by James McCloud; a mysterious pilot that trains various racers, including those from Dark Million.

On the final episode, Bart Lemming makes a last stand against Black Shadow and passes on the title of Captain Falcon to Rick. After Bart's disappearance, Rick becomes the new Captain Falcon with Clank Hughes taking over the Dragon Bird.

In F-Zero Climax he becomes the new Captain Falcon. He drives the Blue Falcon GT and he can only be unlocked by beating every Cup on each difficulty setting at first place overall.

By default, Rick is a playable character with the Dragon Bird with great boost and strength, but lacking when it comes to grip and overall speed. 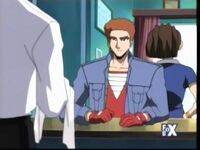 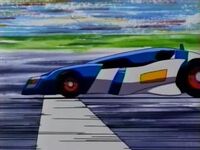 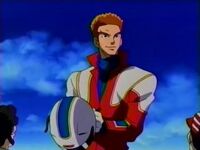 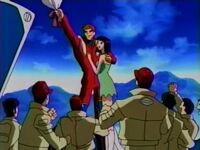 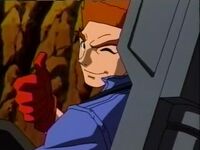 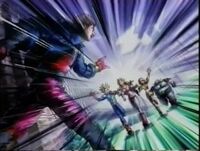 Rick rushing over to his friends

Rick trying to play guitar in the end credits Rick startled after a nightmare 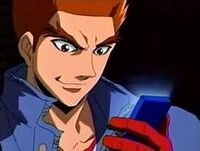 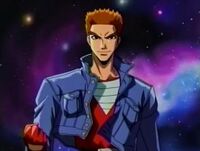 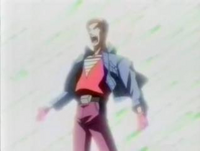 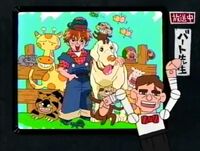 Rick and his old life living in Boston, including his dog, Axel 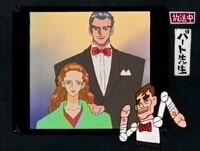 Rick's parents, his father was a racer and his mom was weak from illness during Rick's birth