Mighty Gazelle is a cyborg F-Zero pilot, who makes his debut in F-Zero X.

Mighty Gazelle was one of the many injured pilots in an accident three years before the events of F-Zero X. Though no one had died, Gazelle suffered the worst and had to be revived as a cyborg.

However, despite Gazelle's near death experience, he joined the brand new F-Zero X Grand Prix, against the wishes of those who protested against his entry.

His participation has caused many protests, possibly due to the unfair advantage his mechanical parts give him. Despite his increased skills as a cyborg and his upgraded machine known as the Red Gazelle, he still lost to Captain Falcon in F-Zero X, as the GX manual states that Falcon was the winner of that Grand Prix.

Living only for F-Zero, he ignores the complaints of those who oppose his race participation -- no protest would make him skip a race. Because he is a cyborg, he has been able to polish his racing skills without fear of death. Through analysis of his past races, he has fine-tuned all of his reflex-related components.

Gazelle is also revealed to have a non-cyborg girlfriend in his GX interviews, but it is not known what she looks like or if she is even human. Additionally, Gazelle also reveals that he does disaster rescue when he isn't racing.

In the anime, Gazelle has an entirely different backstory where he is known as Roy Hughes, the father of Clank Hughes and the best friend of Andy Summer, AKA the anime counterpart of Captain Falcon. He was a spy for the Galaxy Police and became severely injured after an undercover mission on the planet Heiru (Forno in the english dub) went wrong.

Years afterwards, Roy Hughes was revived as Mighty Gazelle, by the anime variant of Dr. Stewart. Gazelle then became part of the Mobile Task Force; albeit also unwillingly working for Black Shadow's Dark Million organization by no fault of his own.

At some point, Gazelle was tasked to work alongside his son, Clank Hughes. However, Gazelle nor Clank knew of each other's familial connection; until much later. Roy sacrificed himself to save Clank, after a bombing set up by Zoda. The Task Force were locked inside for safety as Roy managed to cover Clank, eventually succumbing to the damage. Clank became devastated, though Dr. Stewart promised him that Roy would be brought to life again.

At the end of the anime, he is seen in his human form cheering on his son in the F-Zero Grand Prix six years later in 2207. 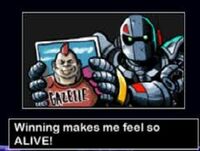 His profile being introduced in F-Zero GX's Story Mode.