Hailing from the planet Huckmine, the Furikake people are known for the unusual custom of pairing for life. They find a partner and pair up with that individual and do not leave them until they both find mates to marry, and as a result, have new partners. Gomar and Shioh are two such examples of this. Gomar is the short one who boasts an impressive intellect, whereas Shioh is tall and boasts a tall physique. Gomar envies Shioh's height and stature, but they get along well. When one begins to say something, the other will finish his sentence.

Although they perform as one person, the F-Zero committee at first denied their entry due to considering them as two individuals. However, they were eventually allowed to enter after revision of the rules. They have since worked together in the Twin Noritta. Despite the presence of two cockpits, they drive together in perfect synch. However, their career in the F-Zero GP may soon be ending, as each of them will marry the following year after the F-Zero GX Grand Prix, therefore giving them new partners.

The Twin Noritta was seen as a generic machine in a lot of races; however, Gomar and Shioh's only appearance was in Lap 19, Lucy's Epic Duel. In it, Gomar and Shioh maintain their camaraderie, but unlike the games, they talk in sync instead of finishing each other's sentences. In addition, they functioned as criminals that pose scams on unsuspecting people, including Lucy Liberty. On the passenger warp gate to Earth, they announce their ambitions in unison: to become the greatest villain the universe has ever seen! They deduce the quickest way to accomplish this would be to work under Black Shadow...but they have no F-Zero machine, nor the money to afford one. So, they sell a bunch of phony stuff, from a backpack filled with pointless rocks claiming to be crystals, to golden goblets claiming to help people lose weight, although they're just scams and the aliens lie to cover them up.

When they wanted their own F-Zero machine, Lucy got to work and architected the Twin Norrita; they're new to F-Zero racing, so they don't have any experience. Jack Levin and Rick Wheeler were hired to keep an eye on the two criminals who escaped from Huckmine, and Lucy added an extra cockpit and fixed the flaws to their prototype. Eventually, they raced in a Mute City course, but they failed to win as their machine went on the fritz; she added an extra booster and since it was fragile, it could only be used twice. Rick took first and the aliens were taken into custody; however, they were left unfazed as they'll have their chance again someday, even Lucy who awaited the challenge on building a machine.

The Twin Noritta appeared in some episodes after Lap 19 (such as Lap 31), indicating that the twins are back in their racing career. 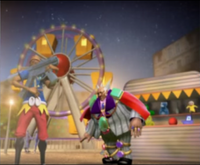