Samurai Goroh's F-Zero machine is called the Fire Stingray, an extremely small craft with only one fin sporting a pinkish color with fire painted on the back of the ship. As described in the original F-Zero game, careful and perfectly timed use of the super jet (boost) is the key to operating this machine. Also, the Fire Stingray has the highest max speed and is also the heaviest out of the four original machines. Its extremely strong body crams everything as compactly as possible. Due to its excessive body weight the Stingray has poor acceleration. The two engines the Fire Stingray is powered by are considered the "pride of the Universe".[1] Due to this raw power, it has a dangerously high maximum speed, making it a top-ranked contender. When racing this machine, pilots should make good use of boost power and try to control the machine while maintaining its high speed. The Fire Stingray has a reputation of cornering stability.[1] The machine's weak boosters are made up for by a very good grip, allowing Goroh to effortlessly negotiate corners.[2]

On Lap 25, Bart said that Lisa Brilliant, Goroh's wife, was the one that designed the Fire Stingray. She painted it pink since this was her lucky color. 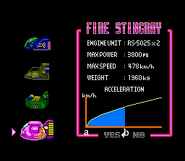 Fire Stingray selected in F-Zero.
Add a photo to this gallery

Retrieved from "https://fzero.fandom.com/wiki/Fire_Stingray?oldid=12942"
Community content is available under CC-BY-SA unless otherwise noted.