The F-Zero X Expansion Kit, released in Japan on April 21, 2000, was the first add-on disk for the Nintendo 64DD. The Kit will only operate in conjunction with the cartridge of the original game, however, all of F-Zero X's regular features are accessible plus twelve new tracks, a car editor, and a track creator. Since the Expansion Kit has a larger amount of storage than the original cartridge, it includes new soundtracks in stereophonic sound as well as the entire collection of monaural audio tracks from the original game.

The Track Editor is a detailed track creator that allows the player to design their own racing circuits. Using a cursor, the player can determine the basic layout of the track and also add points to it to create track elements such as curves and hills. Furthermore, numerous properties like half-pipes and cylinders, as well as numerous road surfaces, such as slip zones, can be added. The player can also test their creation at any time and run practice laps.

In addition to the two new cups, it is also possible to create custom cups. The disk can save up to a hundred tracks and up to three ghost racers per course. IGN singled out the track creator as the Expansion Kit's strongest feature since it is virtually the same tool the designers of F-Zero X used for themselves to create the original circuits.

The Car Editor offers a variety of options when creating a vehicle. Using a set of pre-existing parts, the player must balance their creations' settings and performance abilities before the machine is finished and named. 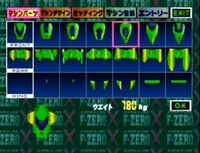 Add a photo to this gallery
Retrieved from "https://fzero.fandom.com/wiki/F-Zero_X_Expansion_Kit?oldid=14055"
Community content is available under CC-BY-SA unless otherwise noted.