F-Zero X is a futuristic racing video game for the Nintendo 64 console. Developed by Nintendo's EAD division, it was released in Japan, Europe, and North America, in 1998. F-Zero X has been re-released on the Wii Virtual Console in Japan, in Europe as the 100th VC title, and in North America, in 2007. When the game was later developed and released for the iQue Player in China in 2004, it became the first and only title of the series to feature online multiplayer, as 2000, an expansion of the game was exclusively released in Japan providing numerous extra features, not in the original game.

F-Zero X is the third released installment in the F-Zero series and the first released video game in the franchise to feature 3D graphics. The game has a steep learning curve and its gameplay experience is similar to that of the original F-Zero title. However, the title does introduce a "death race" mode and a random track generator called the "X Cup". In the death race, the player's objective is to annihilate the 29 other racers as speedily as possible, while the X-Cup "creates" a different set of tracks each time played.

At first, only six machines are available for play, extra ones are unlocked by beating the Grand Prix on the various difficulty levels. These are:

Note: By completing the first three cups on Novice you will unlock a new row of machines, this cycle will continue when you complete them on Standard, Expert, and Master.

The Car Editor offers a variety of options when creating a vehicle. Using a set of pre-existing parts, the player must balance their creations' settings and performance abilities before the machine is finished and named. The Track Editor is a detailed track creator that allows the player to design their own racing circuits. Using a cursor, the player can determine the basic layout of the track and also add points to it to create track elements such as curves and hills. Furthermore, numerous different properties like half-pipes and cylinders, as well as numerous road surfaces, such as slip zones, can be added. The player also can test their creation at any time and run practice laps.

F-Zero X features remixed music from its predecessor. Besides the games' visual detail, another setback in order for the title to run well at its frame rate is the quality of its audio. Due to compression, the game only features monaural sound.[2][10] Two soundtracks were released featuring music from this game. The F-Zero X Original Soundtrack was released on September 18, 1998. The F-Zero X Guitar Arrange Edition, which was released on January 27, 1999, contains ten guitar arranged musical tracks from the game. Both the original soundtrack and the guitar arrangement are composed by Taro Bando and Hajime Wakai.[11][12]

Critics generally praised F-Zero X for its fast gameplay, the abundance of courses and vehicles, keeping a high framerate even though there can be up to thirty racers on-screen at the same time, and track design. However, the game has been widely criticized for its lack of graphical detail. The title received Game of the Month for the month of November from Electronic Gaming Monthly. An editor stated, "the graphics may be simple, but they're smooth and the action is fast". IGN described F-Zero X as an exceptional update to the original game that "only suffers under its generic look". They believed that unlike the first game, F-Zero X "is not about showing off graphics or sound capabilities -- it's all about gameplay". They considered the game to rival Wave Race with its "perfectly fine-tuned controls and a fresh approach to racing". 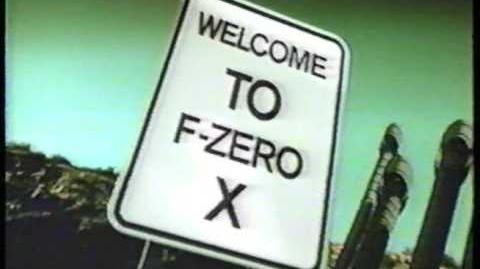 Retrieved from "https://fzero.fandom.com/wiki/F-Zero_X?oldid=13094"
Community content is available under CC-BY-SA unless otherwise noted.