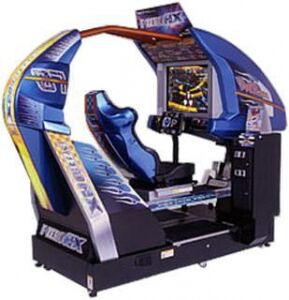 F-Zero AX is a futuristic racing video game for Triforce in the arcades. Developed by Sega's Amusement Vision department, it was released in Japan, Europe and North America, in 2003 alongside of its Nintendo GameCube counterpart, F-Zero GX. F-Zero AX is the second game from Sega to utilize the "Triforce" hardware conceived from a business alliance between them, Nintendo and Namco. This hardware allows for connectivity between the GameCube and arcade games.

F-Zero AX is the fifth / sixth released installment in the F-Zero series and the successor to F-Zero X. The game continues the series' difficult, high-speed racing style, retaining the basic gameplay from the Nintendo 64 title. The in-game differences between F-Zero AX and GX lie in particular to their number of vehicles and tracks. Both games have their own exclusive tracks, vehicles and vehicle parts. However, everything in the Triforce version can be unlocked in the GameCube version.

F-Zero AX is a futuristic racing game where thirty pilots race on massive circuits inside plasma-powered hovercars in an intergalactic Grand Prix at speeds that can exceed 2000 km/h. The game is noteworthy for its visuals, intense action, high level of difficulty and for its very high sense of speed. Tracks include loops, half-pipes, cylinders, and jumps. Some courses have innate obstacles like dirt patches, mines, tricky jumps, and magnetic tubes to navigate. Before a race, the player is able to adjust a vehicle's balance between maximum acceleration and maximum top speed. This adds strategy, as players with greater knowledge of the circuits can make better decisions. There is a limited range of machines available for the player to choose. There are only ten vehicles in this arcade game plus the four pilots and with their own vehicles from original F-Zero game; Captain Falcon, Dr. Stewart, Pico, and Samurai Goroh. Each vehicle has its own characteristics and performance abilities, including and limited to varying levels of top speed, acceleration, cornering, grip, boost, body, and each is driven by a different character.

There are six courses in F-Zero AX and a single race consists of three laps around one of those tracks. Each machine has an energy meter, which serves two purposes. First, it is a measurement of the machine's health and is decreased for example, when the machine hits another racer or the side of the track. Second, the player is given the ability to boost after the first lap. Boosting greatly increases the racer's speed, but also drains their energy. Energy can be replenished by driving over recharge strips that are placed on the track. If a player falls off a track or runs out of energy, a time penalty is received. As with all F-Zero titles, combat is not a crucial part of the game, but machines can attempt to damage and destroy each other using side or spin attacks.

F-Zero AX includes two different modes of play. In the Race mode, the player chooses a cup and races against twenty-nine opponents through each track in that cup. Using this mode, up to three other people can join in to compete simultaneously when the cabinets are connected to open up "Versus Play". Though each track must be completed before time runs out, the player is awarded "time extensions" for reaching certain checkpoints in the course. In the mode Time Attack, the player chooses a track and complete it in the shortest time possible.

Using a cardboard "F-Zero License Card", the game will build a custom vehicle that can later be upgraded using the pilot points earned for winning races. The card also saves the players' user ID, custom machine data, race data and pilot points, and provides a password for the F-Zero AX Internet Rankings. This Internet ranking system is where players will enter a password on the Internet and will get ranked based on their position in the database. When using the F-Zero License Card, players will receive a password after racing in Time Attack that can be entered into the F-Zero Internet Rankings. It will save their time with the machine they've used on the database and rank it against other peoples scores.

There are three types of the game cabinet: standard, deluxe, and the Monster Ride. Standard is a regular sit-down model while deluxe is shaped like Captain Falcon's vehicle and offers a hydraulic tilting seat simulating the craft's cockpit. The F-Zero Monster Ride utilizes the machine called "Cycraft", which was developed cooperatively between Sega and Simuline. The machine makes use of three servo motors for movement.

A Nintendo GameCube memory card can be plugged directly into the F-Zero AX cabinet to download and/or upload special data. If the memory card has F-Zero GX data on it, it is possible to access and use the custom vehicles contained there. Nevertheless, players can to use these arcade cabinets to unlock permanent access to multiple features in F-Zero GX; the fifth and last cup called the "AX Cup", a number of new custom machine parts and ten new vehicles. This is easier said than done, as AX cabinets are quite rare; according to a fan-compiled F-Zero AX Locations database, less than twenty are available in the North America region. However, more can be located and its content can instead be unlocked in F-Zero GX or the use of a cheating device.

At the AOU Amusement Expo in mid-February 2002, Nintendo announced that an arcade board under the name of "Triforce" was being developed in conjunction between Nintendo, Namco, and Sega. In an a follow-up interview held in London, Miyamoto said announcements will be made revealing several software titles that will make use of the hardware. The first occurred in late March 2002 and was from Sega's Amusement Vision. The announcement revealed Sega's subsidiary Amusement Vision and Nintendo will collaborate to release F-Zero video game titles for the Triforce arcade board and the Nintendo GameCube. While Amusement Vision was responsible for most of the game's development, Nintendo EAD executives including Shigeru Miyamoto, Takaya Imamura, and Isshin Shimizu, took on leading roles. Nintendo revealed the first footage of F-Zero GX at the Pre-E3 press conference on May 21, 2002. While the game was known to exist several months prior, it had remained behind closed doors until that conference.

Via a live video conference call from Japan on July 8, 2003 Shigeru Miyamoto, supervisor Takaya Imamura and Amusement Vision president Toshihiro Nagoshi answered questions about the two F-Zero games. There Miyamoto announced the Japanese version of the game was finished and would be soon available to the public. Takaya Imamura commented that even though he worked directly on F-Zero throughout its different incarnations, this time Imamura took a "step back and was involved at kind of a producer level at looking over the game". Imamura went on to say he "have worked on the F-Zero series, and seeing the results of the collaboration with Sega, I found myself at something of a loss as to how we can take the franchise further past F-Zero GX and AX".

Hidenori Shoji, Daiki Kasho and Alan Brey composed a soundtrack for GX and its arcade counterpart called, F-Zero GX/AX Original Soundtrack. It was released on July 22, 2004, in Japan by Scitron Digital Content.