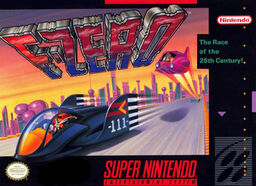 F-Zero is a futuristic racing video game developed and published by Nintendo for the Super Nintendo Entertainment System. The game was first released in Japan on November 21, 1990 and later in North America on August 13, 1991 and in Europe on June 4, 1992. The title was downloadable over the Nintendo Power peripheral in Japan and was also released onto the Nintendo Super System. In late 2006, F-Zero became available for the Virtual Console service on the Wii.

This is the inaugural game of the F-Zero series of video games and was first released in Japan as one of the two debut titles for the Super NES, but in the U.S. this launch title was accompanied by more games. F-Zero is considered to be the game that set a standard for the racing genre; the title was known for its gameplay, having an original scenario, and running on what was considered to be at the time a groundbreaking technological achievement that made the title the first racing game to be developed this realistically. As a result, the title inspired the future creation of numerous racing games inside and out of its own subgenre.

F-Zero is a futuristic racing game where pilots race on circuits inside plasma-powered hovercars in an intergalactic Grand Prix at speeds that can exceed 400 km/h. The objective of the game is to beat opponents to the finish line while avoiding hazards such as land mines, slip zones and magnets that pull the vehicle to certain sides of the track in an effort to make the player damage their vehicle or fall completely off the track. A race in F-Zero consists of five laps around the track. The player must complete each lap in a successively higher place or be disqualified and unable to finish the race. For each lap completed, the player is rewarded with an approximately four-second speed boost and a number of points determined by place. One of the "SSS" on-screen displays will be shaded green to indicate that a boost can be used. If a certain amount of points are accumulated, an extra "spare machine" is acquired. F-Zero includes two different modes of play. In the Grand Prix mode, the player chooses a league and races against twenty generic vehicles of different colors through each track in that league. The Practice mode allows the player to practice seven of the courses from the Grand Prix mode.

The game introduced the first F-Zero characters; Captain Falcon, Dr. Stewart, Pico, and Samurai Goroh. Each of the four characters have their own selectable vehicle along with its unique performance abilities. Each machine has an energy meter, which serves the purpose as a measurement of the machine's health and is decreased, for example, when the machine hits the side of the track or another vehicle.

F-Zero has a total of fifteen tracks divided into three leagues. Additionally, the Death Wind, Port Town, and Red Canyon courses have areas that are not accessible unless the player is on another version of those tracks, which then in-turn closes the direction previously available. The game has three initial difficulty levels; beginner, standard, and expert. Completion of the expert class in any league unlocks the master difficulty level. Unlike most F-Zero games, there are three iterations of Mute City, showing it in day, evening, and night settings. In BS F-Zero 2, Mute City IV continued the theme with an early morning setting.

F-Zero takes place in the year 2560 when humanity's countless encounters with these alien life forms throughout the Universe expanded Earth's social framework to astronomic proportions. Trade, technology and cultural interchange are carried out between planets. The multibillionaires who earned their enormous wealth through this intergalactic trade were satisfied with their rich lifestyles. However, they also yearned for new entertainment to stimulate their lazy lives, so a new entertainment based on the old F-1 races was founded. People were at first outraged with the brutality of the competition, but eventually demanded more excitement. They soon after called these Grand Prix races simply, "F-ZERO".

The game was developed by thirty people over a period of two years alongside Super Mario World, and Pilotwings. Takaya Imamura was surprised to be able to so freely design the characters and courses as he wanted since F-Zero was his first game. Miyamoto wanted more than just four characters to be in the game, however most of them were left out due to the technical limitations of the SNES. As a result, four out of the twenty vehicles on the track are unique while the remaining sixteen became palette swaps of one model. The SNES could not properly process the graphical effects F-Zero had at such high speeds which resulted in a scrolling problem and in order to fix this the cartridge had to include a DSP chip which made the game appear fluid.

The F-Zero album was released on March 25, 1992 in Japan by Tokuma Japan Communications. It features twelve songs from the game on a single disc composed by Yumiko Kanki, Yukio Kaneoka and Naoto Ishida and arranged by Robert Hill and Michiko Hill.

F-Zero was widely hailed for being such a visually stunning home console game; it has been called the fastest and smoothest pseudo-3D racer of its time and the first racing game to offer such graphical realism. This all due to the fact that F-Zero was one of the first SNES titles to pervasively use a special exclusive hardware feature of the system called "Mode 7". This graphics-rendering technique allowed different kinds of scaling and rotation effects of bitmap graphics, which the game used to simulate 3D environments without processing any polygons. Such techniques in video games were considered to be revolutionary in a time when games were restricted to static/flat backgrounds and 2 dimensional (2D) objects.

F-Zero sold at least a million copies and also became part of the Player's Choice line.

In 1992, Toshihiro Nagoshi was head of Sega's AM2 development team when he played F-Zero on the SNES for the first time. When Nagoshi experienced the game, not only did its realism impress him, but Nagoshi commented F-Zero "actually taught me what a game should be". F-Zero served as an influence for him to create Daytona USA and other racing games. Approximately ten years later Nagoshi would serve as one of the co-producers for F-Zero GX.

Nintendo was working on a sequel for the first F-Zero title, but the game was canceled in its early stages of development due to the impending release of the Nintendo 64. The unfinished sequel was instead broadcasted in multiple parts on the St. Giga subscription service for the Satellaview attachment of the Super Famicom. Using this add-on, gamers could download these titles via satellite and save it onto a special Flash cartridge. The sequel was released under the names of BS F-Zero Grand Prix and BS F-Zero 2 Grand Prix during the mid-1990s, making them the second video game of the franchise. The BS F-Zero games have four playable vehicles that share the same performance attributes as the ones from the original SNES game, however they were redesigned and given different names. The tracks are named as a follow-on from F-Zero — the first track is called "Mute City IV", since Mute City I-III appeared in the original game. BS F-Zero 2 Grand Prix features one new league containing five different tracks, a Grand Prix and a Practice mode.

When F-Zero was released onto the Virtual Console service, the game was praised by GameSpot for its controls, longevity and track design. The reviewer felt the game offered exceptional gameplay, with "a perfect balance of pick-up-and-play accessibility and sheer depth". However, both IGN and GameSpot, who gave the title a 7.5/10 and 8/10 respectively, agreed that the game could've used a multiplayer mode.