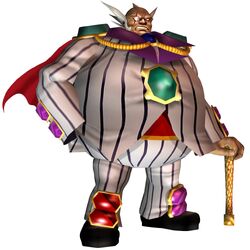 The famous head mogul of the universal traders, Don Genie is extremely rich. As such, he has developed an extremely narcissistic attitude and views other humans with contempt. Despite his riches, he has been arrested multiple times for his illegal trade of energy resources and weapons. For each arrest he has had to pay a small fortune to be freed and allowed to walk.

He recently became an F-Zero pilot. He spent a fortune purchasing the Fat Shark. It is unknown what his reasons for joining are, but it may be to promote his trading company. He himself has stated that controlling F-Zero will be his largest investment of all. He has little respect for his fellow pilots, though he thinks Captain Falcon has potential and is believed to have connections to Black Shadow.

Retrieved from "https://fzero.fandom.com/wiki/Don_Genie?oldid=5851"
Community content is available under CC-BY-SA unless otherwise noted.