This mysterious pilot makes even Black Shadow, the evil Emperor, shudder with fear. Since the huge accident four years ago, several F-Zero pilots have turned up missing--in all of the missing-persons investigations conducted by the Space Police, Deathborn was the primary suspect. Deathborn has died three times, but each time was brought back to life by exchanging his real body parts for mechanical ones. Through these procedures, he has become essentially immortal. A device installed within his body allows him to travel freely through space, making it possible for him to mysteriously appear anywhere at any time. He banishes those he dislikes to the outer limits of space, where they become drifting vagabonds for all eternity. Deathborn is plotting to take over the universe--his plan is to obtain the ultimate power that would allow him to determine life and death on every star as he sees fit.

Aside from the information provided in his profile, little else is known about this F-Zero pilot. From what can be gathered from the story mode of F-Zero GX, he is the champion of the F-Zero Underworld, and he had previously hired Black Shadow to acquire the championship belt of the overworld. Black Shadow had clearly failed, and Deathborn had threatened him that he would only give him one more chance. Why Deathborn didn't, or couldn't, take the belt himself is unknown.

After Black Shadow fails again, Deathborn punishes him for his failure and challenges Captain Falcon to a one-on-one race for both belts. Before the race commences, he reveals to Falcon his plan - the powers of light and darkness are condensed in both belts respectively, and that when combined, provide ultimate power that will allow him to control the universe, judging life and death on each star, saying that he can "reduce this whole galaxy into a pile of ashes in an instant", implying he has his own reasons for wanting to destroy the galaxy the F-Zero races take place in particular. After an intense race, Falcon emerges victorious and Deathborn is last seen plummeting towards his death, his vehicle exploding as it collides with a rock wall.

In the last chapter of F-Zero GX's story mode, the creators reveal that Deathborn was their "best creation", but fail to elaborate. This implies the creators may have something to do with Deathborn's apparent deaths, rebirths, and loss of humanity.

In a stark contrast from his GX counterpart, Deathborn is the mysterious, powerful, mostly silent antagonist which was responsible for manipulating the F-Zero Committee, aside from Don Genie, behind the scenes.

Rick Wheeler eventually meets up with them all at once after he was abducted by Black Shadow on the F-Zero Committee's alleged planet; it's been unveiled that Deathborn and Don Genie were simply "shadows" that Black Shadow controls.

In GX, the main version of Deathborn is portrayed as pure and utterly evil. He is aggressive and ruthless, only showing a speck of mercy to Black Shadow by giving him one more chance to win the F-Zero Grand Prix, words which he holds true to. He also displays tendencies of a megalomaniac with his desire to obtain ultimate power and take over the universe. His choice to not attend the F-Zero Grand Prix suggests he is someone to prefer to work in the shadows and keep a low profile, though he wasn't afraid of showing himself in front of millions of F-Zero fans, just to punish Black Shadow and challenge Captain Falcon (though it's possible that there's some written law which prevents F-Zero Underworld inhabitants from entering the normal F-Zero Grand Prix. His motivations, or even how he could be driven to become so evil, remain unknown at this current time.

In the anime, however, he doesn't talk much, though he's still as intimidating and manipulative like Black Shadow. 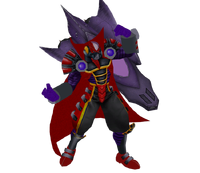 Deathborn in Chapter 8.
Add a photo to this gallery