Black Shadow is a cold-blooded king of evil feared by all. He is wanted by the Galactic Federation, yet he often shows up at the Extraterritorial F-Zero circuits as if they are his own. However, Captain Falcon has seen much success capturing his foot soldiers, and Black Shadow wants nothing more than to see the end of this meddling bounty hunter, preferably in front of millions of fans. It's inevitable that in any race he enters, there will be some kind of huge accident.

Black Shadow has been shown to be extremely evil, cold, and cruel. He does not take into consideration the effects his actions have on other people. When provoked, he doesn't hesitate to fight back and punish those who cross him. He only values people if they can serve a useful purpose, as he saves Miss Killer several times from certain death.

He deeply hates Captain Falcon, who has captured several of his minions and foiled several of his plans. Knowing that Falcon participates in the F-Zero Grand Prix, Black Shadow had his own machine built so that he could enter and kill Falcon in front of millions of viewers. However, it is hinted that he also just simply loves destroying other machines at will.

He has also been portrayed as psychotic but extremely cunning. He is known to laugh at the sight of destruction or when setting a deadly trap, showing how twisted he is. This is further evidenced in the anime when he enters a race just to wreak havoc.

Black Shadow is the leader of the evil organization known as Dark Million and is the primary antagonist in the anime. He's still just as ruthless as ever and is accompanied by Zoda, Miss Killer, Baba, Octoman, Bio Rex, The Skull, and sometimes Pico. Strangely enough, Deathborn and Don Genie also exist as two of his disguises. Much like them, he controls the F-Zero Committee behind the Task Force's backs, and also wants to achieve his dream utilizing all the Reactor Mights to remake a universe of evil by halting the expansion left by the Big Bang, causing it to compress and destroy all planets, and creating a second Big Bang born from malice.

Black Shadow meets his demise at the end of Episode 51, where Rick Wheeler has activated the Boost Fire going around the generator, causing it to explode. Infuriated, he leaps out of the exploding Black Bull and goes after Falcon one last time. Captain Falcon tells Rick that he is to become the next Captain Falcon, then jumps out of the Blue Falcon and performs the iconic Falcon Punch on Black Shadow to prevent him from escaping the blast radius. Black Shadow screams and Captain Falcon smiles serenely as the explosion from the generator engulfs them, ending both their lives and saving the universe from Black Shadow's insane ambitions.

His own profile video, "Bloopers", is, hence the title, a Blooper styled video. The first take shows Black Shadow being picked up by the neck by Deathborn, until he falls over and hits the camera. He gets up in pain, and walks away in annoyance. The second take is the same thing, but more focused on Black Shadow, as the scene ends, he gets off the platform and walks with his friend, dusting him off. The third and last take shows just Black Shadow walking in pain, when he falls over and gets up, wiping his knees and looking awkwardly at the camera. 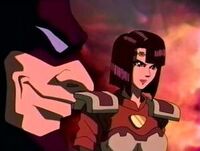 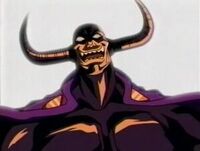 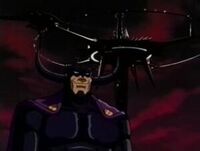 Black Shadow and the Dark Reactor 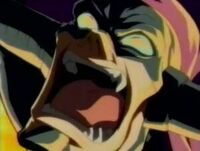