F-Zero Climax
Berserker is a cloaked man who pilots the Red Bull.

In reality, he's Bart Lemming (real name being Andy Summer), the former Captain Falcon (anime only) who assumed another identity to infiltrate the Dark Million association. He faked his death in an accident with Blood Falcon and began working for Don Genie in the illegal, underground races he sponsors.

He later reveals himself to Rick Wheeler after the latter had been captured on the F-Zero Committee's planet. They then made their escape together. 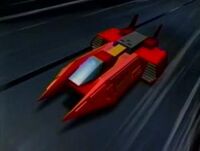 Red Bull.
Add a photo to this gallery

Retrieved from "https://fzero.fandom.com/wiki/Berserker?oldid=14378"
Community content is available under CC-BY-SA unless otherwise noted.